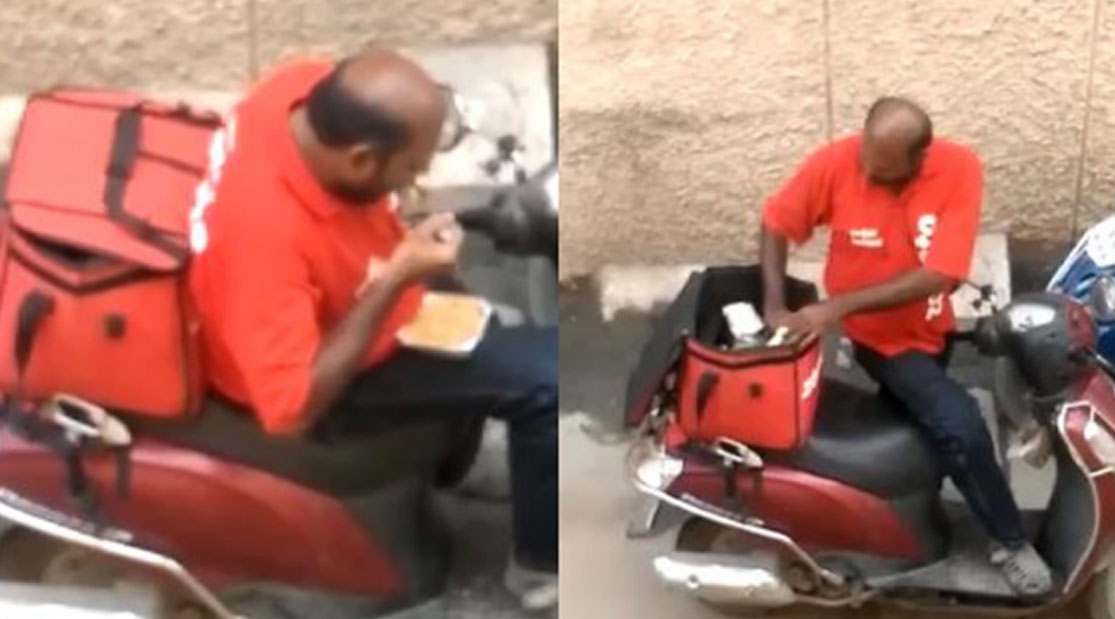 The sacking of a food delivery man in India after he was filmed eating a client’s food and resealing the containers has sparked a conversation about the delivery industry in the country.

The video, which was recorded in Madurai in southern India, shows the delivery man wearing a T-shirt from one of the most popular Indian food delivery app Zomato, eating food out of boxed orders then resealing them and putting them back into a delivery bag.

Initially met with disgust, anger and ridicule, the video was watched thousands of times.

The social reactions prompted Zomato, one of India’s biggest food delivery companies, to react with a statement that they took “food tampering very seriously”.

“We have spoken to him at length and while we understand that this was a human error in judgement, we have taken him off our platform,” the company added.

However, with the news that Zomato had decided to terminate the employment of the unidentified delivery man, the conversation began to turn more sympathetic.

The Zomato delivery chap eating from various orders is depressing. It's what happens when you make people who can't afford a square meal, keep handling mountains of food. All food deliveries should offer 1-2 square meals a day for their delivery people. It's only fair. Great CSR.

Feeling bad about the Zomato delivery guy. Everyone knows how exploited these guys are in India. And there's so much competition that many of these guys can't even afford to sit and have a meal lest they lose one more delivery.

“Earlier we used to get 60 rupees [85 cents] per delivery. Then from 60 it became 40. Still I continued because I had to educate my children. Now the company is planning to make it 30 rupees per delivery. But I have expenses – petrol is expensive, I have children as well. Tell me what should I do?” one delivery person, who did not want to be identified asked.

Another said “I am the sole bread earner in my family. In case I have an accident, I don’t have an insurance policy. The company doesn’t give us insurance either. If there is a mishap then I will be in trouble. The company should think about that.”

App-based delivery is a relatively new business in India, but has seen huge levels of growth in a short time.

Apart from food, Indians can now also order things like groceries and even furniture to be delivered to their homes. Retail delivery giants like Amazon and Flipkart, which was recently acquired by Walmart, also employ tens of thousands of people to act as delivery staff.

With an estimated six to eight million people joining the Indian workforce every year and with jobs not growing anywhere close to that rate, many people are willing to accept even menial jobs with exploitative work conditions just so that they earn some level of income.

Zomato says it employs around 150,000 delivery people across India, while Swiggy, another food delivery app, said it has around 100,000 active delivery partners at any given time.

While many companies do not share specifics of how much they deliver every month, Zomato recently put out a statement which claimed that they were receiving around 21 million food orders every month. There is no overall financial estimation of how much the industry is worth.

However, both Swiggy and Zomato have denied that they ask their delivery partners to meet unreasonable deadlines or impose fines on those who do not meet “targets”.

“All our delivery partners are independent contractors and choose to login (when and for as long as they want to) as per their own will for delivering food through our platform. They are free to go offline and come back online after any duration (be it an hour, day or week). Hence, all partners are advised to go offline when they want to take a break,” claimed a representative from Zomato.

Both companies also said that they provided their delivery people with benefits like insurance.