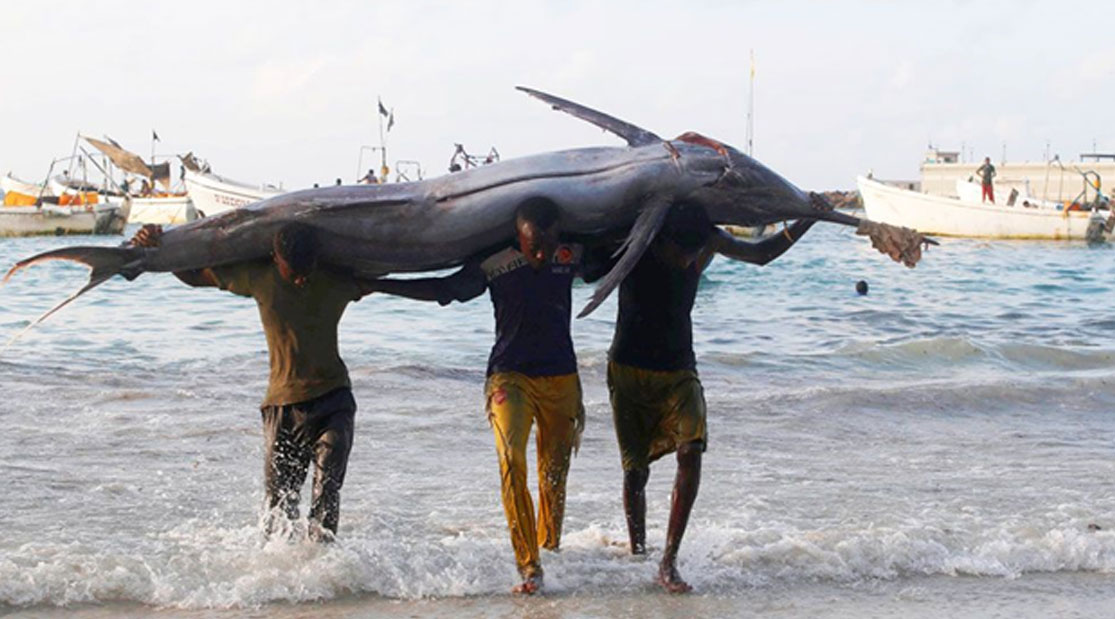 The contract could damage fish stocks and local livelihoods

Legal experts and local fishing groups have warned that a deal between the Somali government and a consortium of Chinese companies will be difficult to regulate, may encourage piracy and could lead to the levels of overfishing seen in West Africa.

The Somali minister of fisheries, Abdillahi Bidhan, who signed it in December 2018, has confirmed the details of the deal, in which Chinese companies paid a total of US$1 million to fish within Somali waters off north-east Africa twice a year.

“We have conducted the signing of 31 offshore tuna licenses to FOCA [the consortium] in a transparent manner. Anyone applying for a tuna licence must go through the requisite process upon which we will inspect their vessels,” Bidhan said.

According to the ministry of fisheries website, the deal allows 31 Chinese long-line vessels to fish for “tuna and tuna-like species” for one year, a deal that automatically renews each year. The vessels will be able to fish 24 nautical miles from shore within Somali territorial waters.

However, the government was reluctant to declare the full terms of the contract, according to Mohamud Nur Hasan, a member of parliament’s sub-committee on fisheries and natural resources, who also represents fisheries communities in the Lower Shabelle region in the southern part of the country.

“The deal will certainly impact our local fishermen who depend on fishing for their livelihood,” the lawmaker said. “Chinese vessels have poured into African waters to get nice seafood for trade, degrading fish stocks.”

He highlighted the environmental impact of such contracts. “We worry [about] overfishing, destruction of fish species and availability of the tuna which the Chinese were granted to catch. In the long term this deal is not benefiting Somalis,” Hasan added. “Chinese trawlers have already destroyed parts of the ocean floor in West African countries.”

Overfishing in West Africa continues to threaten food security, natural ecosystems and local economies. China is the largest fishing power, with more than 500 industrial fishing vessels operating in the region’s waters. It is estimated that around 54% of local fish stocks are overfished, with illegal fishing accounting for almost 40% of all fish caught.

Local fishing communities operating from Mogadishu’s Liido beach – although worried about their catch – seemed unaware of issues such as habitat degradation and pollution that may directly impact the fish stocks they depend on for income.

Abdirahman Omar Osman, a Mogadishu-based environmental activist and lawyer, says lack of ecological protection and the government’s weak or ineffective policies make it difficult to manage the fishing sector. He warned this is providing an opportunity for some Chinese companies that are believed to overfish in many African countries and elsewhere.

“Overfishing by Chinese trawlers has cost thousands of jobs in West Africa. Thousands of fishers were left idle in their home towns. Now if they come to Somalia, they will ruin the local fishers and destroy our waters,” he said.

Osman also warns the deal could make possible the return of Somali pirate groups, whose hijackings of global maritime vessels have been halted since 2012.

“This could even mean more illegal fishers come disguised with fake contracts, and armed pirates make a comeback in Somali waters,” the lawyer said.

“It is not the right time. We needed some laws and regulations to protect the local fishers first,” Roble said. “The contract is about tuna but we are afraid the Chinese will catch everything and leave us nothing,”

The Somali government estimates that the domestic fishing sector annually contributes US$135 million to the economy.

“This would mean that, in the coming few years, our local fishermen will no longer be able to meet local consumption levels as fish stocks decline,” Roble believes.

According to the fisheries ministry, Somalia has 604 fish species with 420 of these being commercially viable in an “exclusive economic zone” of 1.2 million square kilometres.

A major concern raised by local fishermen is the type of fishing equipment that will be used in Somali waters. The majority of Chinese boats use bottom trawling, an extremely destructive practice that drags long nets along the ocean floor and catches almost everything in its path.

“Local fishermen use small nets and if sea creatures are accidentally trapped in their nets, they discard them back to the ocean,” Mohamed Sheikh Ahmed, a boat owner and fisher in Mogadishu explained. “These foreign trawlers catch even sea turtles which they later sell on the black market.”

While many countries in Africa and elsewhere have taken steps to impede bottom trawling, the experts say Somalia lacks the strong government or regulations needed to stop disastrous fishing of the marine ecosystem.

“There is nobody checking the type of equipment the Chinese will use for fishing in Somali waters, to ensure the marine ecosystem will be safe from harm. I think this is a looming threat,” environmental lawyer Osman noted.

But minister Bidhan said the government will deploy its own personnel onboard the Chinese vessels to ensure the companies adhere to the terms of the contract, which includes not exploiting other sea resources.

“There will be two government personnel onboard every vessel of the Chinese fleet,” the minister said.

Officials in Somaliland, an independent region in northern Somalia, have rejected the Chinese fishing deal with the government in Mogadishu, saying that it does not cover their waters.

“The Somaliland navy is regularly patrolling our coast, and will defend its territorial integrity from Chinese or any other illegal fishers,” the Somaliland minister for livestock and fisheries, Hassan Ali Gafadhi, said.