5,000 free meals made from ‘ugly food’ to raise awareness about food waste 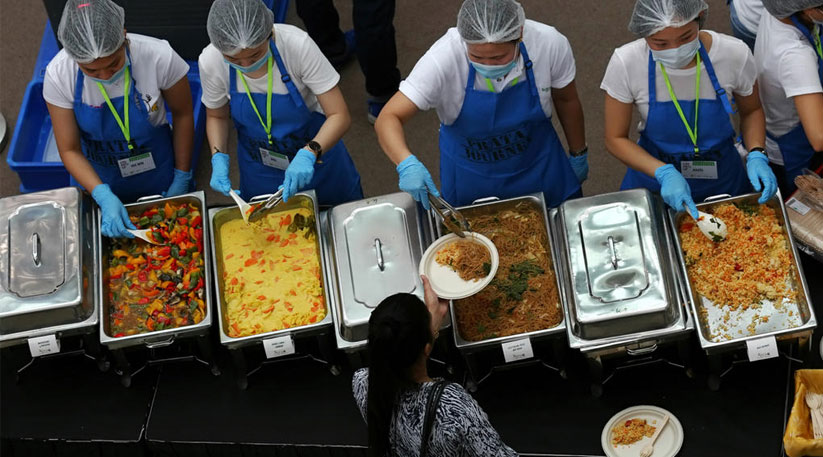 SINGAPORE, March 26 — About 1,500kg of blemished or unused vegetables that would otherwise have been discarded were used to cook halal and vegetarian meals for 5,000 people at City Square Mall yesterday.

The event, which seeks to increase awareness about food waste, was the first edition of ‘Feeding the 5,000’ in Asia, which has been featured in more than 40 locations worldwide.

About seven to eight partners, including community non-governmental organisations such as The Food Bank Singapore, were involved in helping make the event happen yesterday.

They picked and transported the “ugly food” to the caterers for cooking, and also set up booths to educate the public on food waste at City Square Mall.

The vegetables, collected from Pasir Panjang Wholesale Centre by volunteers from SG Food Rescue on Saturday, were used in dishes such as nasi biryani and vegetarian fried bee hoon which were handed out to members of the public for free yesterday.

Some challenges that Gone Adventurin faced in bringing the event here were maintaining high hygiene standards.

Ashwin said that they strictly monitored the food preparation process, and the caterers were present when the produce was being sourced.

“At the consumer level, there is a lot of food waste, but a lot of food waste also comes from industries — manufacturing, retail industries. Some retailers are taking steps to address it but what we would love to see more is responsibility across the food chain … not just at the stores.”

He noted that Singaporeans contribute 791,000 tonnes of food waste annually across households, supermarkets, food establishments and the food industry, costing the average Singaporean household up to S$1,440 every year.

“We hope to change the perception of ‘ugly food’ that is still perfectly edible — it just has a little bit of blemish here and there,” he added.

“Consumers’ demand for perfect looking fruits is fuelling food waste, yet an ugly apple tastes just as good as a good looking one. Why bin it when you can still eat it?” said The Food Bank Singapore management associate Margarita Seah.

SG Food Rescue co-founders, Daniel Tay and actress Judee Tan, told TODAY that their wish is to have “no food waste”.

The group collects vegetables from Pasir Panjang Wholesale Centre on a weekly basis, scoring between 1,000 and 2,000kg of vegetables every time.

About 25 per cent of food produced at farms go to waste, while 10 per cent is lost at the wholesale level, Tay pointed out.

“We’ve forgotten where food comes from … Don’t just let supermarkets tell you what is edible,” he said. — TODAY